The big picture across the molecular life sciences

INTRODUCING THE NEXT FEBS Congress

The 47th FEBS Congress (‘FEBS 2023’) will be held in Tours, France from 8th to 12th July 2023, under the slogan ‘Together in bioscience for a better future’. The event is hosted by the French Society for Biochemistry and Molecular Biology (SFBBM), and the journals of FEBS are also closely involved in the development of the scientific programme.

We look forward to welcoming researchers from across biochemistry, molecular biology and related disciplines for an exciting few days of research updates, inspiration and networking. Browse the  Congress website for the scientific program, an introduction to Tours, and to find out about opportunities to present your work.  Registration and abstract submission are now open! 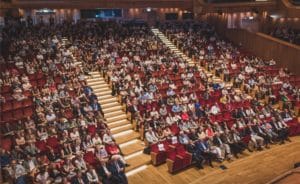 The annual FEBS Congress is one of the most visible activities of FEBS. As one of the largest bio-congresses in Europe, attracting up to ~2000 attendees, the Congress provides a platform for international scientific exchange and showcases the newest developments in biochemistry, molecular biology and related areas. The Congress comprises inspiring plenary lectures presented by outstanding scientists, a range of subject-specific symposia to provide deeper dives into different areas of bioscience research, extensive poster communications, and interesting workshops and other activities on related topics. It is also a celebration of achievements, with several FEBS medals and prizes awarded. FEBS Congresses are a collaboration between FEBS and one or more of its Constituent Societies, moving to a different location within the FEBS area each year.

FEBS supports participation of a large number of young scientists in its annual Congress through the FEBS Congress Bursaries scheme. In addition, the Congress is also immediately preceded by the FEBS Young Scientists’ Forum (YSF), a lively gathering of over 100 PhD students and young postdocs, whose attendance at this event and the ensuing FEBS Congress is funded by FEBS YSF grants.

Reports and photos from each recent FEBS Congress appear in the first issue of FEBS News after the event.