The Federation of European Biochemical Societies (FEBS) came into official existence on 1 January 1964, with the main initial goal of facilitating intra-European meetings in biochemistry. FEBS was to provide a formal framework for this purpose that built on informal contacts and collaborations between biochemical societies in some European countries in the preceding few years. The first FEBS scientific meeting was held in March 1964 in London, with a truly international mix of speakers and over 1000 attendees. The early annual ‘meetings’ eventually became the current annual FEBS Congresses.

However, the need for additional activities to support biochemistry and biochemists, and encourage collaboration and information exchange between scientists working in different countries in Europe, in particular across the serious political boundaries in existence for much of the second half of the 20th century, was soon apparent. Hence, it was not long before FEBS had added summer schools (later called Advanced Courses) and, crucially, scientific publishing into its portfolio. In the 50 years since 1964, the dynamism and devotion of a succession of scientists working for FEBS on a voluntary basis, and careful management of income from its journals, saw the range of activities of FEBS diversify further, with a prestigious Fellowships programme for research and training begun in 1979, and initiatives such as the Young Scientists’ Forum, undergraduate and postgraduate education workshops, science and society workshops, promoting women in science, and assistance to Central and Eastern Europe starting around the turn of the century. The number of Constituent Societies of FEBS – the biochemistry and molecular biology societies in individual countries in Europe and neighbouring regions for which FEBS acts as an umbrella organization – also increased dramatically from the initial 18 to over 40 in the early 2000s as the Soviet Union, Yugoslavia and Czechoslovakia split into independent states, and FEBS’ area of interest extended to neighbouring regions of Europe.

Since 1964, FEBS has witnessed huge changes in science and in Europe. To mention just some of its many responses to this, FEBS  developed from its biochemistry roots to embrace the full spectrum of modern molecular life science research, played an important role in supporting and integrating biosciences and scientists from Central and Eastern European countries through times of great political upheaval, launched open access publishing options, and has an increasingly global outlook.

The 50th anniversary of FEBS in 2014 provided an opportunity for reflection, and celebrations that year included the publication of two books of historical perspectives on FEBS, which can now be downloaded as pdfs. 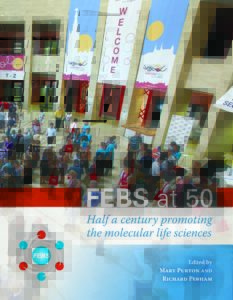 FEBS at 50: half a century promoting the molecular life sciences, edited by Mary Purton (FEBS Open Bio Executive Editor at the time) and Richard Perham (The FEBS Journal Editor-in-Chief 1998–2013), provides a snapshot of the origins of FEBS and its work over its first 50 years, with contributions from both those working on behalf of FEBS and those who benefited from the scientific training and diverse support offered. 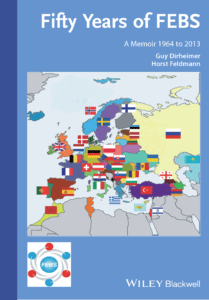 In addition, Fifty Years of FEBS – A Memoir 1964 to 2013, by Guy Dirheimer and Horst Feldmann (past long-serving FEBS Officers), builds on an earlier book on the history and development of FEBS published for the 40th anniversary of FEBS, to present a comprehensive archival record of FEBS activities.